2013 has been my busiest year of writing ever, and it has included multiple collaborative projects. I really enjoy collaboration, particularly the early stages. At that point it’s all about the ideas, and the project is taking a shape that is (hopefully) stronger than any individual would have devised on their own. Here's some thoughts on the process.

Where there’s only two of you — such as in the project Dread Code, which is going to hit you in a nerve cluster when Ali Maloney and I finally get it out the door — it’s all about the relationship between you. Respect and honesty are the qualities which make that work.

Once you get beyond two people, somebody has to be in charge. Call them the director, call them Grand High Pooh-bah; you need somebody who ultimately makes the final decisions. My regular mob Writers’ Bloc is a collective, but the group understands itself well enough to appoint a director for every show it does. This year I got to be in charge for the Edinburgh International Book Festival show with John Lemke and Poppy Ackroyd. 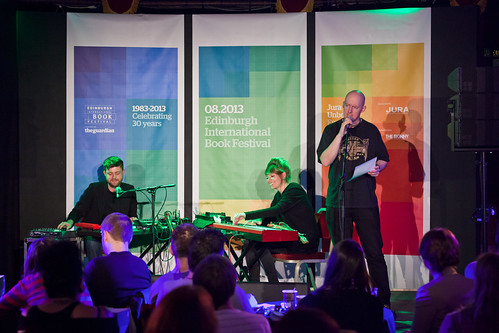 Managing a collaboration is all about balance. You need drive, because that initial burst of enthusiasm will not carry your group all the way to the finish line. You need vision, because everybody will see the project in a slightly different way, and you are the one that has to bring them together in harmony. And you really, really, need good people skills, because creative people can be egotistical and temperamental, and you may need to get through that to reach the point where the brilliant work emerges. That includes being able to say “no” without flinching.

You also — and this can be the hardest part — have to accept that other people’s ideas may be better than yours, and if the group agrees, you have to be willing to give in.

Perhaps you are working within an existing structure and the rules are set. Season 8 of Star Trek: The Next Generation would impose a lot of restrictions on your writing team. But if you’re creating something from scratch, particularly if you’re not paying professional rates, you owe your collaborators a piece of the fun that comes with raw creation.

On the Book Festival show, we were challenged to create stories around John and Poppy’s debut albums: People Do and Escapement. We got hold of the albums and listened to them on repeat for a week or two. Then we got together over a pint to make creative decisions. It surprised me when people said, “Just tell me what to go and write.” That seemed to miss out the best bit: coming up with an assortment of incompatible, messy ideas, and wrestling them into a workable and powerful shape. I was determined to consider all suggestions at first, and narrow the focus as the weeks progressed towards the event. The easy thing to do, of course, was to let individual writers respond to individual tracks any way they wanted. We could have assembled a programme of random short pieces to accompany the music. Some people were keen to take this route. This was the first time I exerted directorial authority; it seemed to me that this was a special event and a single, multi-author story would be more powerful. Of course, creating it would require more structure.

What struck us about John’s music was its constant movement and European flavour. Poppy’s music seemed more introspective, more passionate. We took these qualities as the basis for two characters who would meet and fall for each other. The man was a fixer for Euro high society, procuring rare goods irrespective of borders or legality. The woman was an academic, a researcher, looking for a way to make a difference; for her true place in the world. He would sweep her off into a world of motion and glamour, and her commitment to change society for the better would eventually break them apart.

I was happy with this central conflict and the narrative it suggested. But a couple of writers hated the idea that the man was the active one and the woman effectively wanted to settle down. Gradually an idea emerged where she would go into space and that was what would end the relationship.

I hated this initially because I saw the interaction between them as the core of the story. I felt we would end up with stories about ‘what it was like to be on a space station’ instead of stories about lovers whose values tore them apart. But the idea created enough energy that I didn’t want to step on it. So I rolled with it, specifying only that the stories should be about the relationship, not the technology.

In the end, what made the science fiction component interesting was when we nailed it as a colony mission to Mars. It made sense for our researcher to be an agriculturalist, and crucially it was a journey that could not be reversed. Once she left, they would never be together again, no matter how much they wanted to.

Once we set deadlines, the first material came in. Quickly we had too much to fit in the show. This is where the director has to make the first really tough decision: eliminating pieces which don’t fit the overall picture. And crucially, it is a picture which emerges. Regardless of what you thought you were going to get, you have to assemble a completed work from what you do get. This is the downside of keeping the concept open enough to allow the writers to put their own spin on it.

I arranged a session where the writers got to meet John and Poppy. Probably my biggest mistake in the process was to let the musicians see early drafts which would never make it into the final programme. As composers they already had an intense, intimate relationship with their music, and those tracks were already full of imagery for them. It was hard on them to accept other interpretations, especially rough scraps which hadn’t had the benefit of the workshop process and might never make it through. Ultimately we all had to get onto the same stage. I had to ask them to trust us.

From about here my iron fist emerged from the velvet glove. Some stories spent too long on tangents and had to be brought back to the theme. Some stories were too long for the time available and had to be cut down. Several got discarded entirely. I moved from general guidance to specific suggestions to, as we ran out of time, direct editing. This is where you can really upset people, but I kept the process transparent and tried to retain the character of each piece while fitting it into the overall story. Even Stuart finally agreed to soften his “and then they all died horribly” ending and provide a brief moment of hope. We were done.

The moment I knew we’d got it right was our one and only rehearsal, in a poky underground studio in Leith. It was fun fitting our narrative into the music. Poppy and John seemed much happier, and there were a couple of moments where the combination of words and music resonated very deeply. I took notes of how it all fitted together and produced a detailed running order showing every transition. On the night, I basically got to relax and enjoy it.

I recommend trying a collaboration if you haven’t before. It’s a different challenge from working in isolation, and it requires a tricky blend of negotiation, sensitivity and assertiveness. But it is also a rare pleasure.

Sixteen stories of ineffective apparitions and substandard spooks. “One of the most concentrated jolts of reading pleasure you’re likely to come across in this or any other life” —Ken MacLeod.